Computer science for everyone 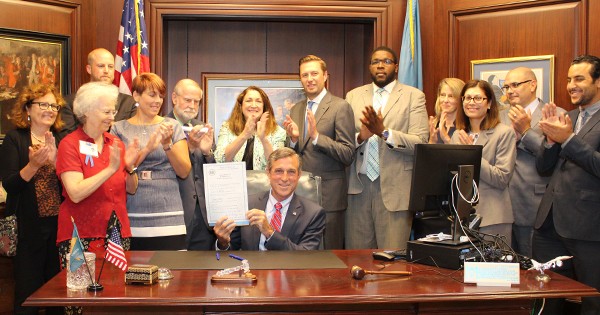 A new law will require every public high school in Delaware to offer at least one course in computer science. When Delaware Gov. John Carney signed the bill, two University of Delaware professors and advocates for computer science education attended as invited guests. Lori Pollock, Alumni Distinguished Professor in Computer and Information Sciences, and Chrystalla Mouza, a professor of instructional technology and interim director of the School of Education at the University of Delaware, witnessed the signing of House Bill 15 on Sept. 22 in the Governor’s Office in the Carvel State Office Building in Wilmington. This law requires that all public high schools in Delaware, including charter schools, offer at least one computer science course at the high school level by the 2020-2021 school year. By the 2018-2019 school year, students will be able to take a computer science course to satisfy a year of the total credit requirement in mathematics, with the exception of Algebra I, Geometry, or Algebra II or the equivalent courses. The state Board of Education and Department of Education will develop guidelines to address how computer science courses can satisfy graduation requirements. Pollock and Mouza joined Carney, Secretary of Education Susan Bunting, State Rep. Deb Heffernan, State Rep. Kim Williams, State Sen. Harris McDowell, members of the education community and other members of the Delaware General Assembly as Carney signed the legislation. Although Pollock and Mouza weren’t directly involved with the bill, they have been working with Delaware’s Department of Education since 2012 to increase access to computer science classes. The new bill is a push in that direction. Soon every high school student in Delaware will have the opportunity to take a computer science class. Perhaps more importantly, because a computer science course can count toward a math requirement, this offering will fit more easily into students’ academic plans. “This will help parents and guidance counselors encourage students to take computer science classes,” said Pollock. When computer science is simply offered as an elective, it takes a back seat to graduation requirements. Allowing computer science to count as a math course makes sense, because “computer science requires a lot of the same problem-solving skills and critical thinking that you do in math,” said Pollock. Computer science rivals reading, writing, and arithmetic as far as its educational importance, said Pollock. “Almost every field is now using computing and data. In any discipline, you will need computing skills going forward,” said Pollock.

Preparing teachers for the push

As schools look to add computer science courses, teachers may need training to prepare for the new offerings. There is no certification for computer science teachers, so often the courses are taught by math or science teachers who have an interest in computing. Mouza and Pollock are co-principal investigators, along with professors Terry Harvey and James Atlas, on a four-year $853,000 grant and a three-year $997,348 grant that focus on computer-science-related professional development for teachers. They offer a summer course, which drew 50 participants this year, and provide in-classroom support throughout the year with the assistance of UD undergraduates. For more information, click here. “We would like to create a credential, following a sequence of courses, in the near future for computer science teachers to facilitate the implementation of the bill,” said Mouza. Article by Julie Stewart | Photo courtesy of the Office of the Governor Read this article on UDaily.