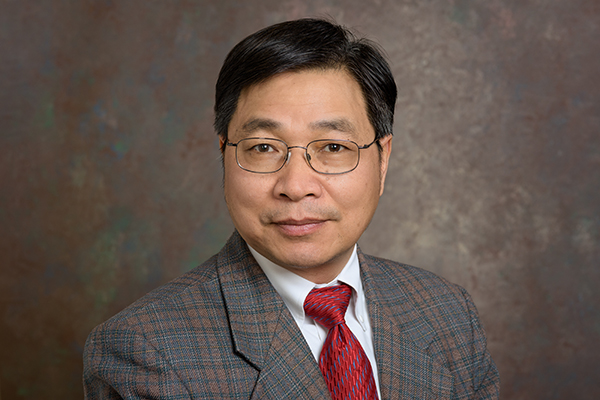 Jinfa Cai, professor of mathematical sciences with a joint appointment in the School of Education at the University of Delaware, has been named a fellow of the American Educational Research Association (AERA), which cited his “notable and sustained research achievements” in the field of mathematics education.

Cai was one of 22 scholars selected as 2016 fellows of the association, which is the largest national interdisciplinary research association devoted to the scientific study of education and learning. The new fellows will be inducted at the AERA annual meeting in April in Washington, D.C.

“We are delighted to honor these 22 scholars for their contributions to education research and for their dedication to the field,” Felice J. Levine, AERA’s executive director, said. “[They] exemplify the highest standards of excellence through accomplishment, professionalism and commitment.”

A member of the UD faculty since 1996, Cai conducts two lines of research into the teaching and learning of mathematics. One line of research consists of cross-cultural studies examining differences and similarities between American and Chinese students. He said he has a personal interest in that cross-cultural work.

“When I came to the United States [for doctoral studies at the University of Pittsburgh], I visited math classes,” Cai said. “My observation was somewhat different from what I expected based on studies that show students in the United States don’t perform well in math compared to students in many other countries. It made me want to investigate this.”

The result has been a long-running research project in which Cai examines students’ mathematical thinking and reasoning in various tasks in both nations. He has found that Chinese students do much better than U.S. students on tasks learned in school, while U.S. students perform equally well or even better than Chinese students on tasks that are not routinely learned, such as those asking students to generate their own mathematical problems to solve.

Cai has conducted a series of follow-up studies to understand the possible reasons for the differences in U.S. and Chinese students’ mathematical thinking. He thinks that teachers in both countries might learn from these findings and, for example, start spending more instructional time on the areas of relative weakness and less on the areas where students already do well.

“It’s hard to transfer lessons from one culture to another, but I think we can learn a lot from each other,” he said.

Cai’s other line of research has involved following a group of U.S. students from grades six through 12 and assessing the results of various approaches to teaching math.

The project began in 2005 when the National Science Foundation (NSF) awarded a $2.4 million grant for Cai and colleagues to investigate whether using a problem-based mathematics curriculum called the Connected Mathematics Project (CMP) improved the results for middle school students learning algebra. The NSF awarded an additional $1.5 million grant in 2010 to extend the study to high school.

After following the same students for seven years, Cai said he found positive effects of the curriculum on problem-solving skills, without sacrificing the kinds of basic math skills assessed through state testing. And those benefits continued as the students went through high school, showing the long-lasting effects of using a particular curriculum and the importance of continuing research for years after a curriculum is first implemented.

“This is the only longitudinal project in mathematics education research that has examined the effect of a curriculum on students’ learning beyond the grade band in which the curriculum was used,” Cai said. “The persistence of the CMP students’ advantages on some measures into high school is quite important.”

In addition to his research and teaching, Cai began serving last year as editor of the Journal for Research in Mathematics Education (JRME), the premier research journal in the field. His editorship will continue through 2020.

JRME advances the frontiers of mathematics education by disseminating the highest quality research on the learning and teaching of mathematics at all levels, from preschool through college. The work it has published over the past several decades has helped to guide research, foster innovations in practice and inform policy debates and decisions.

Cai also is in the final stage of editing a research compendium in mathematics education, which involves nearly 100 scholars worldwide and nearly 3,000 manuscript pages, to be published later this year.