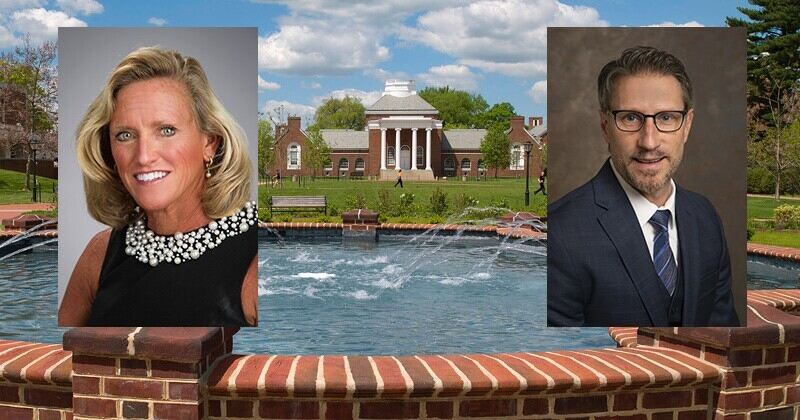 As a state-assisted land-grant, sea-grant and space-grant institution, the University of Delaware is committed to the intellectual, cultural and ethical development of its undergraduate and graduate students as citizens, scholars and professionals. UD graduates often become leaders within the state, known for their creativity, integrity and their dedication to service.

“Both Claire and Mark will bring years of experience and commitment to public service that will benefit all Delawareans,” said Carney in a press release. “I look forward to continuing to work with these two in their new positions.”

Both DeMatteis and Holodick share a commitment to public service exemplified by their impactful careers in government and education. Prior to her January appointment, DeMatteis served as special assistant to Carney, overseeing the management of federal stimulus funding received by the State of Delaware and assisting with crisis management projects across state government.

Among other accomplishments, DeMatteis worked with the DDOC team to implement more than 40 reforms within a 12-month period to address safety within Delaware’s correctional facilities. These reforms included enhanced safety and security at correctional facilities, improved training for officers, expanded opportunities for inmates to receive education, job-training skills and substance use disorder treatment, contracting with a new medical and behavioral health provider, enhanced training and equipment for probation officers and stronger diversity, equity and inclusion initiatives.

“It’s no surprise that Claire has worked for a U.S. Representative, a U.S. Senator and a Delaware governor,” said Joseph A. Pika, James R. Soles professor emeritus in the Institute for Public Administration in the Joseph R. Biden, Jr., School of Public Policy and Administration. “She combines bubbly enthusiasm and icy competence, making her extraordinarily effective in working with people as well as completing difficult tasks. She still seeks out new challenges just as she did as an undergraduate when she entered a national competition among college students to interview the U.S. President — out of thousands of applicants she finished in the top 10. She was a great student and is now a great ambassador for UD.”

Prior to his January appointment, Holodick served as superintendent of Brandywine School District, overseeing 16 schools with more than 10,000 students, and then as a senior leadership specialist within CEHD’s Delaware Academy of School Leadership (DASL).

His work at DASL focused on supporting Delaware students by supporting their educational leaders. During his tenure, he coached superintendents, principals and assistant principals, served as the faculty lead in DASL’s Principal Preparation Program, supported district teams as they developed principal pipeline programs and assisted two school boards with superintendent searches.

Holodick was also instrumental in the development and implementation of the Governor’s Institute for School Leadership at UD, a collaborative effort between UD and the DDOE, the Governor’s Office and Delaware districts to provide professional learning and mentorship to experienced assistant principals and superintendents.

The importance of relationships

For DeMatteis and Holodick, building strong and trusted relationships with their colleagues lies at the heart of their public service careers. DeMatteis said she defines herself as a government leader through the relationships that she builds over time.

“From my experience, being an effective government leader requires building and sustaining strong relationships,” DeMatteis said. “I have served in state and federal government positions dating back to my sophomore year at UD working for the Senate majority leader. Those relationships and the prioritizing of relationships before tasks have enabled me to deliver results in some challenging assignments both in the public and private sectors.”

She also emphasized that the relationships she built at the DDOC were integral to her success in implementing the many safety and educational reforms in Delaware’s correctional facilities.

“Walking into a very male-dominated culture, focusing on building relationships, I gained the trust of correctional leaders and officers, and we implemented needed reforms that have reshaped Delaware’s correctional system,” DeMatteis said.

Holodick similarly identified the ability to build trust, communicate empathy and foster relationships as some of his core values.

“First and foremost, one must focus on building relationships and trust with colleagues,” Holodick said. “When one transitions into a new leadership position, it’s critical to spend a great deal of time observing the operations within the organization and requesting feedback from all stakeholders about what’s working and what needs attention. It’s important to be adaptable, willing to listen to various perspectives and make needed changes based on what you observe and hear. You also must have empathy and treat all colleagues with respect and dignity. This allows us to build a strong team to focus on our critical work: strengthening opportunities and outcomes for all students and families.”

Jackie Wilson, director of DASL and assistant professor in CEHD’s School of Education (SOE), recognizes these traits in Holodick, predicting that they will aid in his work as Secretary of Education.

“Mark’s ability to bring people together to collaborate on challenging problems will be very important as he tackles the challenges of improving Delaware’s lowest performing schools,” Wilson said. “Mark’s experiences as a high school principal and superintendent give him credibility when working with various stakeholders who want someone who has experience leading schools and systems of schools, which is complex work.”

The value of a UD education

DeMatteis and Holodick also share fond memories from their time as students at UD, both noting that their UD degrees supported their careers in public service. DeMatteis graduated with undergraduate degrees in communications, political science and journalism. She credited her professors with helping her develop critical skills in writing, self-discipline and creativity.

“My professors were first rate, and many are still friends today,” DeMatteis said. “I value being a good writer, and that is thanks to the outstanding professors I had at UD. The discipline, creativity, curiosity, innovation and relationships I learned and built at UD have served me well throughout my career.”

As a member of the UD Board of Trustees and an adjunct instructor in the Department of Women and Gender Studies, DeMatteis continues to serve UD, mentor UD students and actively participate in the UD Alumni Association.

“My adviser, Bob Hampel, professor in the SOE, was instrumental in helping me select a topic that was directly related to my work as a principal at Concord High School,” Holodick said.

“My doctoral work on inclusive classroom programs significantly shifted the way we approached everything from scheduling to analyzing data and looking through a lens of equity. I’m proud to say that our approach to building our master schedule shifted dramatically, and the needs of all students, not just some, were taken into consideration when planning.”