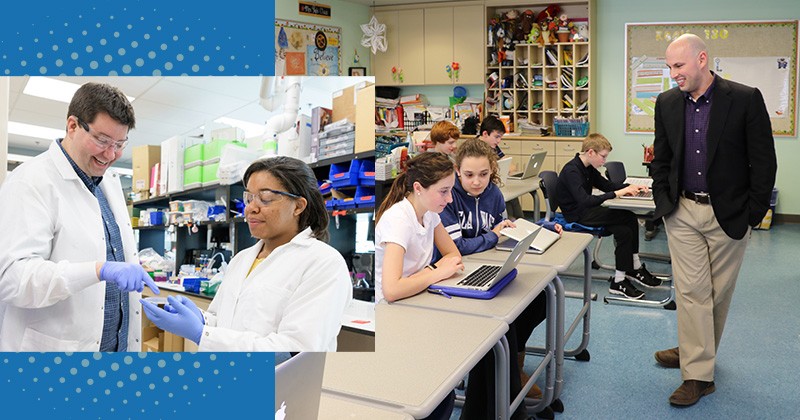 The award recognizes promising and accomplished young faculty. Gleghorn was honored in the Engineering and Natural Sciences category, while Wilson was honored in the Social Sciences and Humanities category. The recipients are chosen by fellow faculty members who have received the Francis Alison Award, the University’s highest competitive faculty honor.

Jason Gleghorn, assistant professor of biomedical engineering, has built a highly influential research program focused on translational research to develop potent treatments for congenital birth defects and conditions associated with premature birth, maternal and fetal health, and pediatric diseases. He utilizes microfluidic and microfabrication technologies to investigate the chemistry, biology and physics behind tissue growth and disease, and his work is highly significant to the field of regenerative medicine. For example, in 2018, his group was the first to grow a self-assembling, functional network of blood vessels at a size relevant for human use.

For his research, Gleghorn has secured substantial research funding from the National Science Foundation, National Institutes of Health, March of Dimes, Delaware Clinical and Translational ACCEL program, National Institutes of Health COBRE Pilot Program Award, and University of Delaware Research Foundation. In 2018, he was the inaugural recipient of the Dr. Bernard Canavan Biomedical Engineering Early Career Faculty Research Award, which is given to one biomedical engineering faculty member at UD every other year.

Just in 2019, he has received two collaborative NIH R01 grants totaling almost $5 million to investigate the mechanisms behind lung injury in premature infants receiving supplemental oxygen. The Research Project Grant called R01 is the original and historically oldest grant mechanism used by NIH, according to the NIH website. The R01 provides support for health-related research and development based on the mission of the NIH.

With one RO1 grant, Gleghorn and collaborators from the University of Texas at Dallas, are investigating how mechanical forces regulate spatial growth in developing lungs to produce new airways. This understanding can potentially serve as an approach to generate new functional airways and rescue underdeveloped lungs. The other R01, with collaborators at Baylor University, is investigating sex differences in blood vessel signaling mechanisms that cause supplemental oxygen-induced lung injuries, which happen more often in premature males than females.

Gleghorn shares his expertise by mentoring future engineers, from high school students interested in science and engineering to postdoctoral fellows preparing to enter academia or industry as leaders. Gleghorn has advised or co-advised three postdoctoral fellows and 14 doctoral students from not only the biomedical engineering department, but also chemical and biomolecular engineering, mechanical engineering, chemistry and biochemistry, and biological sciences departments.

“It is incredibly impressive for an assistant professor to have a laboratory of this size, and I have been equally impressed by the attention he gives to mentoring and teambuilding to make this large lab effective and cohesive,” said Elliott of Gleghorn.

Gleghorn is also a highly regarded classroom instructor who receives excellent evaluations from students for his use of hands-on demonstrations, laboratory-like experiences even within lectures, and outreach programs. He developed and teaches a core biomedical engineering course, Quantitative Systems Physiology, and a popular elective, Microscale Biofluid Mechanics.

Gleghorn’s work has garnered attention from colleagues in the field of biomedical engineering.  In 2017, Gleghorn was one of just ten researchers in the nation to be honored with a Rising Star Award from the Biomedical Engineering Society (BMES), and in 2018, he was named a Young Innovator by the journal Cellular and Molecular Bioengineering. In 2016, he received the Basil O’Connor Award from the March of Dimes, the highest international early career award for physicians/scientists with direct clinically translatable research in the field of preterm birth and birth defects.

Gleghorn joined the UD faculty in 2014 after completing postdoctoral fellowships at Cornell University in microfluidics and at Princeton University in molecular and developmental biology.

Joshua Wilson, assistant professor in the School of Education, joined the UD faculty in September 2014, and has pursued an influential line of research examining how computer-based writing evaluation software can assist in the teaching and learning of writing.

“The importance of writing will only increase as our public education system focuses more and more on higher-level critical thinking skills to address the challenges facing our competitive global society,” Wilson said. “So now the question is: what can we do to better prepare our students?”

Unlike oral communication, writing is a skill few learn naturally. Writing needs to be taught explicitly and requires years of concerted effort. Fewer than one in three students in grades 4, 8 and 12 demonstrate adequate writing ability, according to recognized educational standards, and approximately 30 percent of students will take at least one remedial course while in school.

The problem is that most students are simply not receiving enough writing instruction, spending fewer than 15 minutes each day devoted to the task, according to Wilson. Why are so many students falling behind? The biggest barrier is time. Reading and evaluating student writing is very time consuming for teachers, even more so when the purpose is to provide feedback.

To overcome the time barrier, Wilson is at the forefront of testing and evaluating automated writing evaluation (AWE) software that provides students immediate feedback designed to help them identify writing issues.

Not only do students who use AWE report improvements in critical thinking, problem solving and writing ability, but these improvements are associated with noticeable gains in state test performance. Moreover, gains were not restricted to one particular demographic group, and the software has been shown to help students with disabilities catch up to their peers.

AWE also helps teachers to identify struggling writers early in the school year. For example, Wilson’s research has shown that humans will need between 16 and 28 writing samples from a single student to accurately and efficiently assess writing ability. AWE requires between 3 and 6.

Wilson’s scholarly output has been extensive, especially for an assistant professor at an early stage in his career. Since 2014, Wilson has published 14 peer-reviewed articles in top-tier academic journals, along with two book chapters and five additional publications either accepted for publication or under review. Wilson has also received numerous grants to fund his innovative research agenda, including a grant of nearly $400,000 from the Institute of Education Sciences.

“The superior quality of Dr. Wilson’s work has been recognized by leaders in the field. Without a doubt, he is a rising star in the world of education and a wonderful scholar,” said Chrystalla Mouza, director of the School of Education. “He is the kind of faculty member who will go the extra mile for his colleagues and students. He was a superb addition to our faculty and should be recognized for his outstanding research which is already changing the face of writing instruction.”