Teacher of the Year 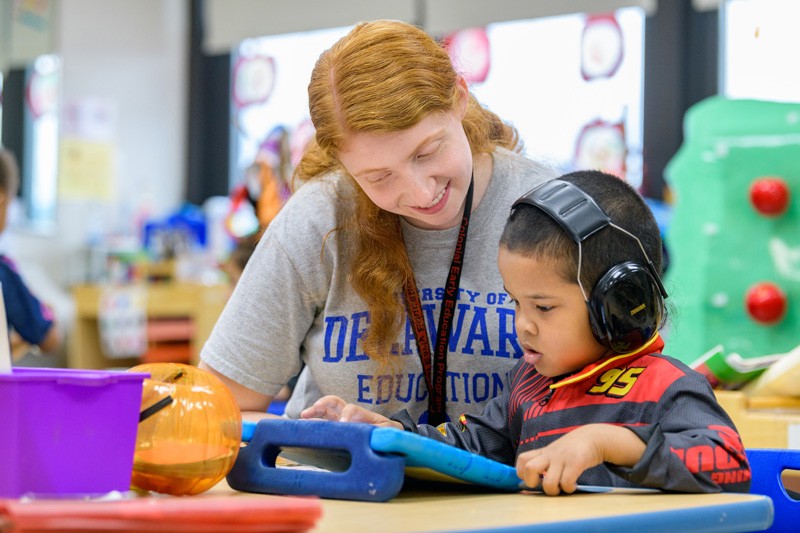 University of Delaware alumna Rebecca Vitelli has been named Delaware’s 2020 State Teacher of the Year. At age 26, she is one of the youngest nominees to receive the state-wide award, being nominated her first year of eligibility for her talent and commitment as a pre-kindergarten teacher in the Colonial School District.

During the next year, Vitelli will fulfill the many duties and obligations of her public role as Delaware’s top teacher. She will meet with legislators, community groups and educational organizations to advocate for the importance of high-quality early childhood education opportunities in Delaware. But Vitelli won’t let these speaking engagements distract from her true calling. On a typical weekday in her pre-k classroom at the Colonial Early Education Program in New Castle, Vitelli focuses on her students, providing evidence-based lessons for children in special education and their typically developing peers.

For example, before circle time, Vitelli takes a child’s hand and begins to sing the clean-up song, renowned among parents and educators.

“Through our many songs we help create a sense of safety, belonging and connection. We also embed a lot of language and motor skills through singing,” said Vitelli, who received an honors bachelor’s degree with distinction in early childhood education in 2014 in the College of Education and Human Development. Just one year later, she completed a master’s in exceptional children and youth with a concentration in autism/severe disabilities.

“One thing my work at UD really taught me was how every single thing you plan and do should be done with intentionality and purpose,” she said. “So even something that just looks like ‘singing,’ there is so much more going on in terms of targeting language, cognitive, physical and social-emotional skills.”

Throughout the day, Vitelli kneels down to communicate at eye level with the children. She asks questions, listens carefully as each student answers, and modulates her voice when speaking.

Debra Nuss, retired special education coordinator for Colonial School District, who worked with Vitelli in 2016, noted she is so engaged with her students that it hardly seems like she’s working at all.

“You sit mesmerized by her seemingly effortless abilities to facilitate children’s play within a carefully engineered, rich learning environment while individually addressing the complex needs of her students with great efficiency,” said Nuss.

Nuss went on to describe Vitelli’s classroom as an “enchanting” place. Vitelli herself is fond of saying there is something “magical” about preschool. It just so happens that all of that magic is supported by a lot of science.

A native of Monroe, New York, Vitelli said she knew from a young age that she wanted to be a teacher, just like her parents.

When Vitelli started researching universities to pursue teacher education, she was looking for degree programs that offered classroom placements as early as possible. At the top of her list was UD.

“A lot of other programs I looked at weren’t able to get students into classrooms until junior or senior year,” says Vitelli. “I wanted hands-on training right away, which is why UD’s early childhood program really stood out to me.”

Vitelli acquired diverse classroom teaching opportunities every year she was enrolled at UD. The early childhood program gave her hands-on, classroom experiences with every age-group under her B-2 certification before full-time employment.

Her first year, she served as a practicum student at UD’s Laboratory Preschool in a pre-kindergarten classroom. The following year, she worked in UD’s Early Learning Center with preschool students 2-to-5 years of age. Vitelli also worked in the Early Learning Center’s infant and toddler classrooms and had placements with first and second grade students at the Independence School in Newark and at Bunker Hill Elementary in Middletown.

At the same time, coursework was exposing her to the mountains of research that underpin the best practices embraced by top educators. Then, through teaching placements and other opportunities, she was putting what she learned into practice, in real classrooms with real students.

Each course in the degree program moved Vitelli closer to her goal of becoming a professional educator. In a class named, “Professional Issues in Early Childhood Education,” taught by Myae Han, Vitelli and a group of peers decided to advocate for change in early childhood classroom recess procedures through their project titled “Rescue Recess.” Their research emphasized the importance of learning through play. They partnered with Caravel Academy to experiment with an indoor recess program.

During the process, they also discovered that in Delaware there were no statewide regulations or standards for how recess should be conducted.

This capstone project inspired her undergraduate honors thesis, which examined recess programs across the state.

“The indoor recess project taught me what it means to be an advocate for children,” said Vitelli. “These children are often unable to advocate for themselves, so they need someone who is going to fight for what we believe is developmentally appropriate.”

Student teaching was a turning point for Vitelli. She completed her placement with Maryann Koziol at the John G. Leach School in New Castle. Koziol’s students were mixed ages between three and five, and about half were special education, each with their own Individualized Education Program, or IEP.

“I was very impressed and touched by the environment — the programming, the compassionate and embracing inclusion model for children with special needs,” she said. “That’s when I knew I wanted to pursue a specialization in teaching children with severe disabilities.”

Vitelli applied to the School of Education’s innovative 4+1 program, allowing her to earn a master’s in just one year by starting graduate work during the undergraduate early childhood major. Because of her experiences in Koziol’s classroom, Vitelli chose to specialize in autism and severe disabilities and served her teaching placement at the Delaware Autism Program at the Brennan School, a school specially designed for students with autism spectrum disorder.

“It was very important for me to be able to apply what I learned in a true special-ed placement and get the hands-on experience,” Vitelli said. “To have that teaching experience in graduate school was incredible. I learned a tremendous amount from my field placements that really helped me feel prepared to start my career here.”

Vitelli will represent Delaware in this year’s National Teacher of the Year competition, presented by the Council of Chief State School Officers.