Reaching the Summit of Scholarship 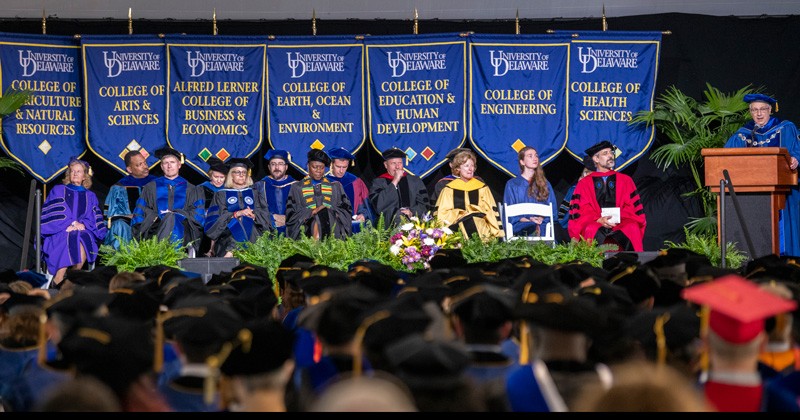 Beneath the velvety hoods and flowing gowns that swept through the North Green at the University of Delaware early Friday, May 31, were scores of well-educated survivors — 182 doctoral students who had withstood the rigor of painstaking inquiry and the defense of dissertations crafted through years of analysis, review, writing, revision, editing and more rewriting.

They were there — with hundreds of family members, friends and faculty — to celebrate their achievement of academia’s highest degree, the doctorate. And it was a grand celebration, indeed.

The pomp and circumstance of the Doctoral Hooding Convocation, with the joy of a bagpiper-led processional and the cheers of all those supporters, mark one of the happiest days of the academic calendar. Some in the audience had traveled many hours to witness it all — from China, India, Nepal, Korea, Uruguay, to name just a few. Others around the world watched the live stream online.

It is a joyous and momentous passage that fewer than 2% of American adults achieve — one that also carries responsibility.

“You are now leaders in the never-ending quest to increase human understanding,” UD President Dennis Assanis said to this new crop of doctors. “Your creation of knowledge finds its highest purpose when it enriches lives, strengthens communities and helps us build a better world.

“As you leave here today and embark on this journey, I want you to be guided by the values that you learned at the University of Delaware. Specifically, I want you to remember the power of innovation and the promise of engagement. These are critical pathways to help us leap into a brighter future.”

The University has 51 doctoral programs. Through May 31, 313 students from across the United States and 32 countries had received doctoral degrees in this academic year, according to the University’s Office of Graduate and Professional Education. More are expected to do so through the summer months.

Doug Doren, interim vice provost for graduate and professional education, thanked them for pursuing their studies at UD.

Mary Martin, associate vice provost for graduate and professional education, explained the distinction of the hood, noting that it should not be worn unless it had been officially given by one who holds the degree. UD’s hood is four feet long, with royal blue velvet on the outside, blue and gold on the inside. Her full explanation is available online.

A meaningful day for mentors

Many of the graduates’ faculty mentors and advisers were on hand for the occasion and it was a day of firsts for some of them, too.

Jared Medina, associate professor of psychological and brain sciences, draped the hood for the first time as adviser to Yuqi Liu of China, whose mother and fiancé also attended the ceremony.

“A lot of times with the international students we almost don’t see the difficulty they face, coming from a completely different culture and then immersing themselves in the Ph.D. program,” he said. “To see someone work through all of that and then do world-class research — you are filled with pride and happiness and looking forward to seeing what she and the other students will do next.”

Jennifer Biddle, associate professor in the School of Marine Science and Policy, awoke at 4 a.m. to make the trip from Sussex County, Delaware, and “hood” her first student — Kristin Yoshimura.

“The dissertation defense is the main thing,” Biddle said. “This is the icing on the cake.”

Mark Mirotznik, professor of electrical engineering who is called “Big Dog” by his students, had a career-high four graduates to hood on the day.

“This is the most rewarding thing we do,” he said. “All of the papers are meaningless. This makes all the difference.”

One mentor — Xiao-Hai Yan, the Mary A.S. Lighthipe Professor in the College of Earth, Ocean and Environment and director of the Center for Remote Sensing — received special recognition as the winner of the Outstanding Doctoral Graduate Advising and Mentoring Award.

Tears filled the eyes of Mary Watson, associate professor of chemistry and biochemistry, as she saw her student, Jennie Liao, graduate and celebrate with her friend, Klare Lazor, who was also graduating.

“They were always together, studied together — and to see them both graduate with awesome jobs, yes, I teared up,” Watson said. “I’m really happy for them and proud of them.”

It was a fine bookend to a week that earlier had seen her own kids – Molly and Addie – graduate from kindergarten.

From kindergarteners to scholars

Those Watson children could be on a doctoral trajectory of their own, if you ask Sean Ellis, who earned his doctorate in economics. He traces his doctoral goal to his kindergarten self.

“When I was in kindergarten, I wrote Dr. Sean Francis Ellis on the side of my crayon box — 25 years later it is a reality,” he wrote in one of the special student messages that were displayed on monitors at the convocation. “I cannot thank my family and friends enough for their moral support, love, and understanding through these years. Now, it is time for all of us graduating to use the knowledge we have learned and the skills we have developed to help solve the myriad of problems facing the world.”

All researchers know that knowledge and discovery often are perched atop many layers of failure, frustration and grit-your-teeth resolve — the intellectual equivalent of blood, sweat and tears.

Much of that kind of resolve was reflected in the student messages. They expressed gratitude, humor, relief and sometimes shared a bit of their story.

Sean McDaniel, who earned his doctorate in computer science, said he pursued this goal “for the 10-year-old me.”

The 10-year-old Sean McDaniel got the science bug while watching the movie Jurassic Park. He decided then that he wanted to be a paleontologist and found out he would need a doctorate to do it.

That goal morphed a bit as the maturing McDaniel decided digging for dinosaur bones might not have the kind of prospects for which he hoped.

“So I decided to get on the cusp of discovery,” which he saw in computer science.

Along the way, he graduated from Hodgson Vocational Technical High School and Delaware Technical Community College, then got his bachelor’s, master’s and doctorate at UD.

Many students pointed to those who had supported them through their work or inspired them to make the attempt — grandparents, parents, mentors, friends, spouses and siblings who shared encouraging messages and other reinforcements.

“This is for my family and friends who have given me so much, my parents who have sacrificed everything, my deceased grandmother who grew up in a world that didn’t see her worth, my 12-year-old self who had an impossible dream of becoming a researcher,” wrote Debora Kamin Mukaz, who earned her doctorate in medical sciences. “In the memorable words of Beyoncé Giselle Knowles-Carter: ‘I’ma keep running ‘cause a winner don’t quit on themselves.’ ”

Several other grandmothers received special mention, including Tyler Sowers’ 90-year-old Grandma Sybil, who took her first trip on a plane to join 11 other family members from North Carolina. Hye Jung Choi’s 92-year-old grandmother traveled from Korea to witness the event. And Emily Edmonds-Eveland’s grandmother, Mary Abate, celebrated her 87th birthday at the ceremony.

Many family and friends invested many hours to be present, including Bipradas Bhattacharjee and Chandra Bhattacharya, whose trip from Calcutta, India, took 40 hours — far more than the usual 22. Their daughter, Moumita, earned her doctorate in computer science and it was “a proud day,” Bhattacharjee said.

Alexander Mironenko, whose dissertation won the Allan P. Colburn Prize in the Mathematical Sciences and Engineering, hopped on a train in Chicago at the last minute to attend. Mironenko already is working as a post-doctoral researcher at the University of Chicago. He arrived late Thursday night after 24 hours on the rails.

“It’s a really exciting moment and I’m excited that my wife is here and she’s also congratulating me here,” he said. “I was always fascinated about chemistry and mathematics and while doing this doctoral degree I was able to combine my knowledge in physics, chemistry and mathematics to do something unique. I think that’s what my physics work demonstrates, I am able to work both on the chemistry side and mathematics side. I’m excited to produce new knowledge and do something new that maybe other people haven’t thought about.”

Michael Babak, whose doctorate is in animal and food sciences, gave a shout-out to the chickens who had taught him so much.

“I would like to convey a special message to all the chickens out there that they are my great friends!” he said. “The accomplishment of my Ph.D. today is a testimony of the existence of our very successful mutual relationship. Long live healthy chickens!”

And Samuel Cogar, whose doctorate is in applied mathematics, served with the U.S. Navy and said “it has been a highly meaningful experience to perform research funded by the Army and the Air Force that may someday improve the safety of service members deployed worldwide.”

Xiao-Hai Yan, the Mary A.S. Lighthipe Professor in the College of Earth, Ocean and Environment and director of the Center for Remote Sensing, won the Outstanding Doctoral Graduate Advising and Mentoring Award.

Five graduates earned prizes for their dissertations, including:

For many more photos from the day, check out the UD Graduate Students’ Facebook page.