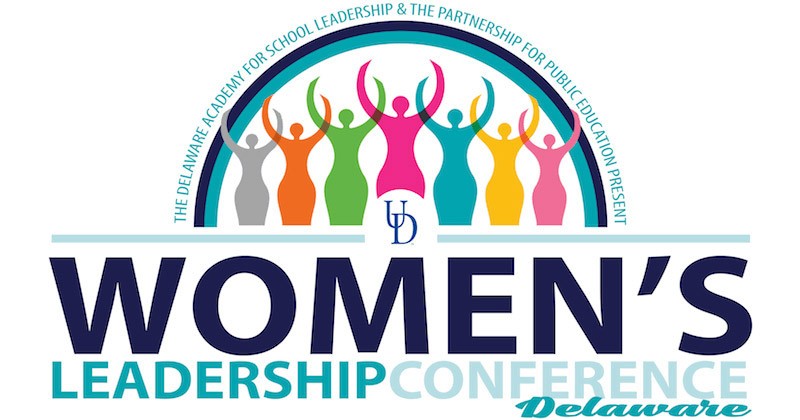 First annual conference brings together educators, politicians from across Delaware

Less than one week after the 2019 Women’s March, women at the helm of education and politics in Delaware gathered at Dover Downs Conference Center for the first annual Women’s Leadership Conference Delaware, hosted by the University of Delaware’s Delaware Academy for School Leadership (DASL) and Partnership for Public Education.

This networking and professional learning event on Jan. 24 attracted 250 attendees from Delaware’s public schools and institutions of higher education and opened a statewide dialogue on the challenges and opportunities that women educators encounter. Nationally, women account for 77 percent of teachers yet only 25 percent of superintendents, according to recent surveys by the U.S. Department of Education and the American Association of School Administrators, respectively. Women of color account for just 2 percent of superintendents.

Conference organizer Jackie Wilson, director of DASL and assistant professor in UD’s School of Education, said the event was created to address issues specific to women and education leadership, as well as to provide a powerful opportunity for current and aspiring leaders to convene for an impactful day of connection, introspection and inspiration.

“Today is proof that if you have a vision for leadership, and that vision includes women leading, that with a great team around you, and a dream, you dream can become a reality,” said Wilson.

Delaware’s Lt. Gov. Bethany Hall-Long provided opening remarks, with a message that clearly resonated with the attendees. “Equal means equal,” she declared. “We are the glue that keeps things together. We are the ones who make things happen and keep the trains on time and classrooms organized. We need more women in leadership.”

Although the challenges that women educators face as they climb the professional ladder have changed in recent years, they have not changed drastically, said Wilson. Among those stereotypes that stubbornly refuse to go gentle into that good night are that women cannot successfully balance childcare responsibilities and leadership positions, and that for women to succeed in a position they must work harder than men.

In a rare opportunity, all three women who have served as Delaware’s Secretary of Education reflected on the challenges they encountered on their ascent to state government’s highest educational office.

Valerie Woodruff served as secretary of education under Ruth Ann Minner, the first woman to serve as governor, and Tom Carper.

“When I first applied for a teaching job,” she said, “I was asked if I planned to have any more children.”

Woodruff never intended to become an administrator, and when she did, “It was not easy,” she said. “Not easy at all.”

But that didn’t stop her from becoming the first woman to serve as a direct line administrator in the VoTech school district and one of the first women to be hired as associate secretary at the Delaware Department of Education.

“To say that it was a challenge is mild,” she said. “But to say that challenge is an opportunity to prove that women can do this, and do as well as we possibly can, is incredibly important.”

Delaware’s current secretary of education, Susan Bunting, who earned her Ed.D. from the University in 1996, shared a similar story. “When I was a teacher in high school, I was not allowed to begin the school year because I was expecting in February, and they felt that would impair the children’s learning.”

Years later, during her first week as an administrator, Bunting recalls going into a school district meeting where she was the only woman. When her male colleagues would leave work at 4:30, she would stay behind because, as she said, “I knew that I had to put in that extra effort to make sure that they realized that we had a lot to offer as females and that we could facilitate and improve what was happening.”

While federal law now prohibits discriminatory hiring practices, those stereotypes that were once overt have become more subtle, reflected less in words than demographics.

“The percentage in women in leadership at the district and state level really does speak for itself about the dearth of opportunities that women actually have,” said Lillian Lowery, who served as Delaware’s secretary of education from 2009 to 2012. Lowery was unable to attend the conference so her remarks were delivered via YouTube. “Getting there is a challenge. But once we get there, and we have that opportunity to lead, being in that position is also a challenge.”

Among the central themes of the event was that women tend to embrace different leadership qualities than their male peers.

“When I went to DOE, as was the case with many other things I had done before, I went to a very male-dominated situation where the guys were in charge,” said Woodruff. “We had a responsibility as women to help some of the gentlemen who had not been used to having to work with women to understand how we think and how we work.

“The culture was one of hard work but also valuing each other, having fun and celebrating successes. Demanding change is very difficult, but if you can do it in a collaborative way where you listen and care about what other people think, it makes a huge difference.”

Women’s leadership is not so much top-down but rather center-out. It’s more about creating an effective network of mutually supportive peers through collaboration, trust and communication.

“No one of us can do all of this work alone,” said Lowery. “I learned that I was surrounded by smart, good people who could help me do the work, and we could see our accomplishments. That made us all — not just me in isolation as a woman, but all of us — more appreciative of the opportunities.”

Among all the discussion of leadership styles based on collaboration and relationship building, it’s no surprise that the sense of camaraderie at the conference was palpable and at times gloriously uplifting. One panel discussion even launched into a lively sing-along of “Where Everybody Knows Your Name,” the theme song from the television sitcom Cheers.

“I want to go where people know my name as ‘educator,’ their ‘troubles’ or struggles in their work are similar to mine, and quite frankly, they get it,” said Eunique Lawrence, assistant principal at Warner Elementary School who prompted the moment by playing the song at the end of her presentation during one of the conference’s 10 breakout sessions.

The conference was held in honor of the late Dr. Marion Evans Proffitt, a lifelong public school teacher and administrator who served as assistant superintendent of the Appoquinimink School District in Delaware. A mentor to many at the conference, the memory of Dr. Proffitt serves as a reminder that changing the narrative and bringing more women into leadership is, unfortunately, a generational task.

A central tenet of changing the narrative, said Woodruff, must include close relationships of women who are mutually supportive of one another as each moves into leadership. “Women need to support other women.”

That sentiment was echoed throughout the conference. Rosalie Rolon-Dow, associate professor in UD’s School of Education, suggested that women who find themselves in professional environments pitted with microaggressions engage in “micro-affirmations,” or brief yet meaningful actions and comments that affirm each other’s worth and identity.

Moreover, said keynote speaker Margaret Grogan, dean of the Donna Ford Attallah College of Educational Studies at Chapman University, watch women leaders closely, take the initiative to develop diverse mentors and, perhaps most important of all, become a good mentor to others.

“You have an advantage that others don’t: You have a heart. So continue persevering, putting yourself out there, learning all you can,” said Bunting in her closing remarks. “Remember to collaborate, remember to trust, remember to ask questions, remember to constantly learn, and I think you’ll find the winds of change have swept the paths. They haven’t all been cleared, but you’re the women who will clear those paths for the future.”