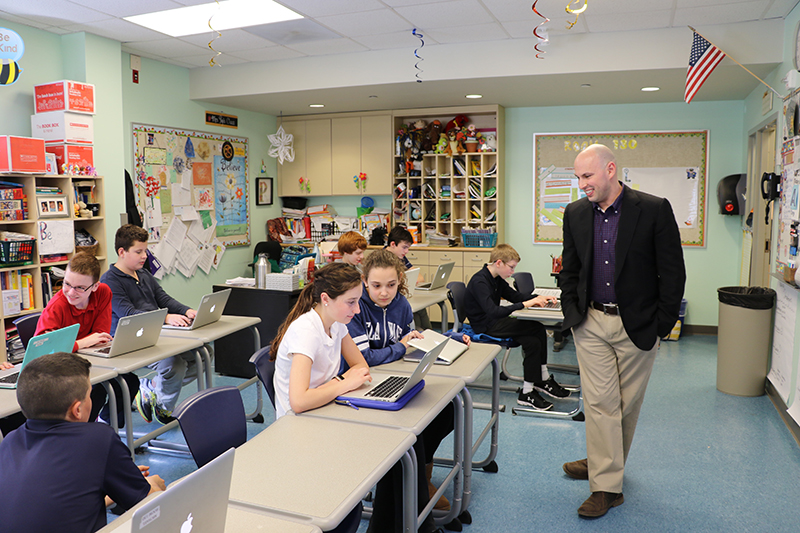 Joshua Wilson works with students at The College School.

Over the past three years, Joshua Wilson, assistant professor in the University of Delaware’s School of Education, has studied if teachers can use computer software to motivate their students and improve their writing.

Teachers and students alike responded enthusiastically, with students asking their teachers “Can we write during recess?”

Wilson’s work studies the use of Project Essay Grade Writing (PEG Writing) software in the teaching and learning of elementary and middle school students. The software, based on work by education researcher Ellis B. Page and sold by Measurement Incorporated, evaluates more than 500 text-level characteristics to deliver immediate feedback on aspects of writing quality like idea development, organization, style, word choice, sentence structure, spelling and grammar.

With the help of this software, teachers are able to spend more time addressing higher-level components of their students’ writing, such as critical thinking, content and idea development. Wilson’s preliminary research has shown that the quality of students’ writing improves in response to the software’s feedback, and it appears to be equally effective for students with different reading and writing skills.

“These findings are encouraging,” said Wilson. “Teachers have a tool to help them assign more writing, accelerate the feedback loop, get students motivated to write and support improvements in writing performance.”

Wilson, Charles MacArthur, professor in the School of Education, and partner Gaysha Beard, supervisor of English language arts (ELA) at Red Clay School District, have now received a nearly $400,000 grant from the Institute of Education Sciences (IES) to expand this work. This two-year grant will allow Wilson, MacArthur and Beard to study the effect of PEG Writing on the writing of 2,880 Red Clay students from diverse backgrounds in grades three through five.

While other researchers have tested the reliability of automated scoring software, Wilson’s work is the first to consider how such software could be used in conjunction with classroom instruction.

This grant is the product of three years of prior partnership work, initially supported by UD’s School of Education.

Wilson’s preliminary research in Red Clay and Colonial School District has found that the use of the software helps teachers identify struggling writers early in the school year, allowing them to offer support to those students sooner.

Wilson, who received his doctorate in special education, also found that, on average, students with disabilities participating in the general education curriculum were able to produce writing of equal quality to their non-disabled peers, even when their first drafts were significantly weaker.

After analyzing students’ and teachers’ use of GoogleDocs and PEG Writing, Wilson found that students in the PEG Writing group showed an increase in writing motivation.

This new grant also comes at an opportune time for Red Clay School District, which is moving toward a one-to-one laptop program for grades three to 12 to be completed by the 2019-20 academic year. Wilson, MacArthur and Beard’s research will potentially inform the district’s decision to purchase PEG Writing and help increase student writing achievement without increasing the burden on teachers.

“While it’s important to know that computers can reliably score writing, district leaders and teachers need to know how best to use the software to maximize teaching and learning. That’s what our partnership project is poised to do,” said Wilson. “The results of this project stand to inform Red Clay’s decision making, as well as any other school district considering whether and how automated feedback systems should play a role in writing instruction.”