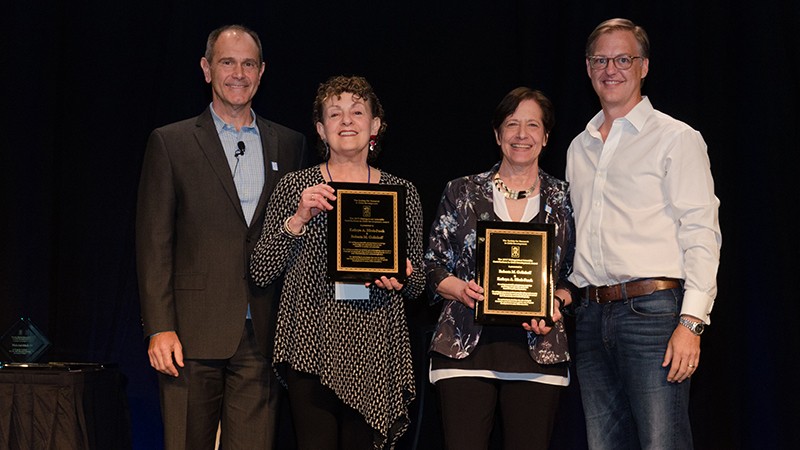 The award recognizes an SRCD member’s continuous lifetime contributions to the scientific body of knowledge and understanding of children’s development. Golinkoff and Hirsh-Pasek are the first research team to receive this award.

Professors Golinkoff and Hirsh-Pasek have dedicated their careers to groundbreaking research on language, literacy, education, and spatial development changes in the field of developmental psychology in infants and young children.

In the late 1980s, Golinkoff and Hirsh-Pasek pioneered an innovative research method for studying pre-verbal infants named the Intermodal Preferential Looking Paradigm (IPLP). Through the use of side-by-side visual stimuli on a television screen and a single auditory stimulus, researchers were able to determine whether pre-verbal infants could match what they heard with one of the events they saw on the screen.

Golinkoff and Hirsh-Pasek later focused their research on the importance of play in the development of young children. Their work has shown the benefits of “guided play” in which adults follow children’s lead in helping them to learn.

In 2010, with help from the National Science Foundation, Golinkoff and Hirsh-Pasek organized the Ultimate Block Party in New York City’s Central Park. Over 50,000 families participated in child-friendly activities that illustrated value of playful learning. Subsequent Block Parties were held in Baltimore and Toronto. Their next project, with the help of the William Penn Foundation, will focus on turning Philadelphia into a “Smart City” in which parent-child interaction and talk is encouraged.

Their most recent book, Becoming Brilliant: What Science Tells Us About Raising Successful Children argues that the development of six skills are necessary for children to thrive in a 21st century global workplace, experience personal fulfillment, and become concerned citizens. With scientific evidence and illustrative examples from current school practices, Golinkoff and Hirsh-Pasek show how educators and parents can nurture collaboration, communication, content, critical thinking, creative innovation, and confidence in children.

At the April SCRD biennial meeting, Golinkoff and her collaborators launched the Quick Interactive Language Screener (QUILS), a game-like, tablet-based assessment tool designed to identify potential language challenges for children between the ages of 3 and 5. The screener assesses vocabulary, grammar, and how children learn new language items.

“Language is foundational to success in school and in life,” said Golinkoff. “The QUILS assessment is given on a tablet and is fun for children to take. We hope that this tool will help schools identify children who need to be referred to a speech-language pathologist rather than having them languish in the classroom for years.”

She currently works as a principal investigator on an Institute of Education Sciences Postdoctoral Training Grant and co-chairs the Frontiers of Innovation Working Group on Playful Learning at Harvard University with Hirsh-Pasek.

Golinkoff also serves as the director of the Child’s Play Learning and Development Lab, which explores the intricate aspects of the language-learning process, cognitive development, and the development of spatial concepts. Parents with a child between birth and four are invited to contact the lab if they are interested in participating in a study.

Golinkoff’s achievements have also been recognized by other organizations, including the John Simon Guggenheim Foundation and the American Psychological Association (APS). In recognition of an “exceptional capacity for productive scholarship,” Golinkoff received the prestigious Guggenheim Fellowship. With Hirsh-Pasek, she received the James McKeen Cattell Fellow Award, the highest honor conferred by the APS, which recognizes “a lifetime of outstanding contributions to applied psychological research.”

Golinkoff and Hirsh-Pasek received the SRCD award at the Awards Ceremony on April 7 during SCRD’s Biennial Meeting in Austin, Texas.

“It was a great thrill—and continues to be—to be recognized for my research by my closest peers in the field at SRCD,” said Golinkoff. “I am lucky to have had Kathy Hirsh-Pasek as a collaborator for so long and to have had so many wonderful graduate students, postdoctoral fellows and undergraduates in our labs. We are honored to be in the company of other scholars who have received this award.”

Photos courtesy of Roberta Golinkoff and the Society for Research in Child Development.