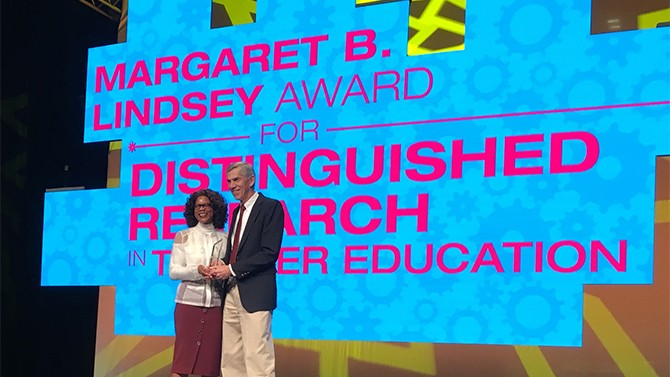 James Hiebert is presented the 2017 Margaret B. Lindsey Award by AACTE

James Hiebert, Robert J. Barkley Professor in the University of Delaware School of Education, is the recipient of the 2017 American Association of Colleges of Teacher Education’s (AACTE) Margaret B. Lindsey Award for Distinguished Research in Teacher Education.

The Lindsey Award recognizes distinguished achievement in research – by an individual or team of individuals – over the last decade that has had a major impact on the field of educator preparation.

For a decade and a half, Hiebert has worked relentlessly with his colleagues to improve the curriculum and instructional practices for preparing prospective teachers to teach mathematics. They collaboratively engage as course instructors to generate hypotheses for improvement, test the hypotheses, analyze the data, and reflect on the findings to make course improvements.

“Jim is recognized as an important scholar who has moved the field of mathematics education forward in significant ways. He invested a major portion of his scholarship in the process of improving teacher preparation,” said Carol Vukelich, dean of UD’s College of Education and Human Development.

Hiebert was a principal investigator for the Mid-Atlantic Center for Mathematics Teaching and Learning, a National Science Foundation-funded consortium of three research universities and their PK-12 district partners. From 2000 to 2013, they studied models for preparing preservice teachers in mathematics and created a model for the continuous improvement of program courses.

Beginning in 2001, Hiebert has received four National Science Foundation grants totaling $8.5 million that he has used to create a collaborative and effective model of teacher preparation.

He also helped launch two longitudinal studies in 2007 to examine the resultant teaching competencies of UD’s education graduates. Findings from these studies are some of the first to show consistent effects on graduates of teacher preparation, even 3-4 years into the field.

Hiebert and his colleagues integrated teaching and research by involving doctoral students in the process of program improvement. A number of these students have been hired by other institutions to replicate this work at their sites.

“His work provides a model for how education faculty can design programs that have a positive impact not only on teacher education candidates’ learning but also on the learning of their students, when they begin teaching,” said Vukelich. “This is exactly the kind of work our field needs.”

In addition to his research contributions, Hiebert is known for his service work, including serving on editorial boards, awards committees, and professional organizations as well as one-on-one interactions with students. In 2014, he received the University’s Outstanding Doctoral Student Advising Award.

Hiebert is a prolific and influential author with more than a 100 journal articles and books to his credit. He has presented 30 professional papers on improvements in mathematics preparation of teachers. His co-authored book The Teaching Gap has sold 120,000 copies and his co-authored book Making Sense: Teaching and Learning Mathematics with Understanding is in its 27th printing.

Randolph Philipp, professor of math education at San Diego (California) State University and president-elect of the Association of Mathematics Teacher Educators, describes Hiebert’s contributions to the literature on math teacher education as “profound.”

In a letter of support, Philipp said he would count Hiebert among the top 10 influential math educators worldwide in the past three decades.

Ralph Ferretti, director of UD’s School of Education, praised Hiebert for tirelessly working to “document the effects of lesson study activities, and to persuade the teacher education community about the merits of this approach to improving teaching.”

UD’s mathematics education program was awarded the Wisniewski Award for Teacher Education Programs by the Society of Professors of Education, American Educational Research Association in 2013.

Hiebert was presented the Lindsey Award during the AACTE annual conference on March 4.