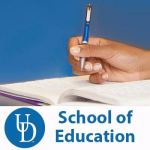 Please join the School of Education in congratulating its faculty, students, and SOE colleagues in affiliated centers on their achievements over Winter session 2017.

The School of Education monthly achievements is a regular feature of the news section of the SOE website. To submit achievements, please email Jessica Henderson by the last day of the month. Please consider sharing recent awards or grants, publications, presentations, and collaborations across campus or in schools.

Roberta Golinkoff, Unidel H. Rodney Sharp Chair in the School of Education, and her long-time collaborator Kathryn Hirsh-Pasek, professor of psychology at Temple University, will receive the 2017 Society for Research in Child Development (SRCD) Distinguished Scientific Contributions to Child Development Award. The award recognizes an SRCD member’s continuous lifetime contributions to the scientific body of knowledge and understanding of children’s development. Golinkoff and Hirsh-Pasek are the first research team to receive this award.

Jim Hiebert, Robert J. Barkley Professor in the School of Education, will receive the 2017 AACTE Margaret B. Lindsey Award for Distinguished Research in Teacher Education at the 69th AACTE Annual Meeting. The Lindsey Award recognizes distinguished achievement in research, by an individual or team of individuals, over the last decade that has had a major impact on the field of educator preparation.

Song, C. Pepe, R Pulverman, Roberta Golinkoff, and K. Hirsh-Pasek published “Does the owl fly out of the tree or does the owl exit the tree flying?: How L2 learners overcome their L1 lexicalization biases” in Language Learning and Development, 12, 42–59.

Post-doctoral researcher Giovanna Morini with Roberta Golinkoff and other co-authors are expecting the publication of “Advances in pediatric hearing loss: a road to better language outcomes” in Translational Issues in Psychological Science.

PhD student Ilyse Resnick and Roberta Golinkoff in collaboration with several co-authors are expecting the publication of “Is the learning that occurs in children’s museum exhibits apparent to parents and experts?” in Journal of Applied Developmental Psychology.

Roberta Golinkoff and co-authors are awaiting the publication of the following articles:

Roberta Golinkoff with Kathy Hirsh-Pasek published a blog post titled “The gift of the 6C’s” on InfoAboutkids.org.

Roberta Golinkoff with Brenna Hassinger-Das and K. Hirsh-Pasek published a blog post titled “A parent’s guide to the American Academy of Pediatrics screen time guidelines” on Huffington Post on December 13, 2016.

Chrystalla Mouza in collaboration with Balu H. Athreya has published the book “Thinking skills for the digital generation: The development of thinking and learning in the age of information.” The book is a rare effort to bring together a focus on thinking (not only learning) and technology from the disciplinary perspectives of education and medicine.

Roberta Golinkoff gave an invited talk on “Lessons from the crib: How do babies learn to talk?” at the presidential inauguration ceremony of Dennis Assanis, the 28th President of the University of Delaware.

Roberta Golinkoff was invited to give the following presentations at the 2016 Principal Investigators Meeting organized by the Institute of Education Sciences in Washington, D.C.

Roberta Golinkoff digitally presented “The power of play for preparing children in a global world” at the Webinar for Organization of American States, Inter-American Teacher Education Network.

Roberta Golinkoff with co-presenters and co-authors has several paper sessions, symposia, and posters accepted for presentation at the biennial meeting of the Society for Research in Child Development in Austin, TX in April, 2017. The citations are as follows:

Jackie Wilson facilitated a work group of administrators for the Ohio Department of Education, the Cleveland Metro Public Schools and the Cleveland and Lorain County Urban League to discuss the Ohio ESSA Plan with a focus on school leadership and equity.

Roberta Golinkoff has been invited to serve on the editorial boards of Babylab at the Department of Psychology, University of Copenhagen, Denmark and Norway Early Childhood Education Group in Stavenger, Norway.

Chrystalla Mouza has been invited to serve as the next Editor-in-Chief of the Contemporary Issues in Technology and Teacher Education (CITE) journal. CITE is an inter-disciplinary journal sponsored by several professional organizations in English, Math, Social Studies and Teacher Education.

Jackie Wilson was invited to serve on a national panel by the National Conference for State Legislators in Salt Lake City, Utah to discuss research based practices regarding school leader preparation. The conference was attended by state commissioner of education for Utah public schools and over 40 legislators including the chair of the house and senate education committees.