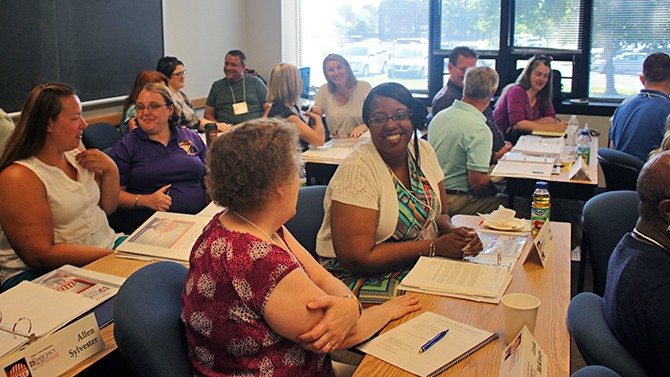 The goal of the institute is to help teachers hone their classroom skills in focusing on the teaching of democracy and civic engagement.

The Democracy Project began in 1999 as a response to a national bipartisan study funded by the National Association of Secretaries of State, known as “The New Millennium Study.”

The study reported that “young Americans have only a limited, vague understanding of what it means to be a citizen in a democratic society.” It indicated that media, parents, political parties and schools all play a role in connecting young people to the democratic process.

“Recognizing the potential impact that schools and teachers have,” said Ed Freel, former Delaware secretary of state and program director. “The Democracy Project was established to work with teachers to sharpen their skills for teaching civics in their classrooms.”

The program is sponsored by UD’s Institute for Public Administration and the Delaware Department of State with support from the Delaware Heritage Commission.

The program runs June 20-24 and will focus on the 2016 election. The teachers will meet Gov. Jack Markell, the Delaware congressional delegation, media representatives, legislative leadership, campaign and political party operatives, and candidates currently running for elected office, among others.

The teachers will participate in field trips to Dover, the state capital, and Washington, D.C.

During the week, the teachers, working with curriculum director Fran O’Malley, will collaborate with each other in developing new lesson plan ideas that they can take back to their classrooms.