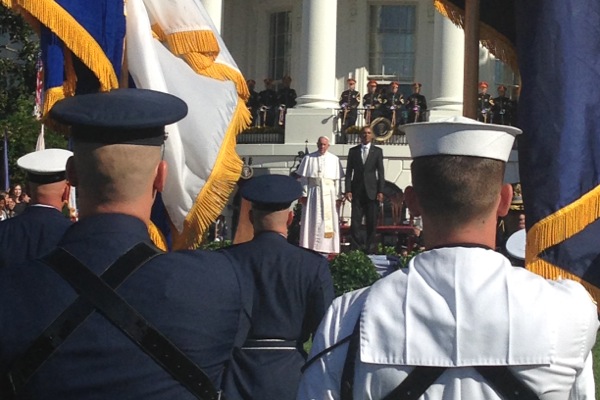 Joseph Henderson, a learning sciences researcher in the University of Delaware’s School of Education, was invited to attend Pope Francis’s arrival ceremony at the White House in Washington, D.C., on Sept. 23. Henderson and collaborator David E. Long, assistant professor in the College of Education and Human Development at George Mason University, were invited to attend in light of their work on climate change education.

“Climate change is a global problem with grave implications: environmental, social, economic, political and for the distribution of goods. It represents one of the principal challenges facing humanity in our day,” the pope wrote. “Its worst impact will probably be felt by developing countries in coming decades. Many of the poor live in areas particularly affected by phenomena related to warming, and their means of subsistence are largely dependent on natural reserves and ecosystemic services such as agriculture, fishing and forestry.”

In his opening remarks at the arrival ceremony, Francis echoed this sentiment, and President Obama offered his support.

“When it comes to the care of our common home, we are living at a critical moment of history.  We still have time to make the change needed to bring about a sustainable and integral development, for we know that things can change,” Francis said.

“We support your call to all world leaders to support the communities most vulnerable to changing climate, and to come together to preserve our precious world for future generations,” Obama said.

Henderson is a member of an interdisciplinary team of researchers and educators working on the MADE CLEAR partnership, a National Science Foundation-funded initiative that prepares teachers to integrate complex social and scientific lessons on climate change into diverse educational contexts.

Led by the University System of Maryland and the University of Delaware, MADE CLEAR aims to support teachers, build partnerships among universities, schools and federal agencies, and develop models of climate change education that can be integrated within the science standards and environmental literacy requirements in Maryland and Delaware schools.

Trained as an anthropologist of environmental and science education, Henderson investigates how sociocultural, political and economic factors influence teaching and learning in emerging energy and climate systems.

In addition to the MADE CLEAR project, he also works with Long on scientific thinking, the values of the scientific community, and the cultural nature of science education research.

“David Long and I are both interested in this notion of cultural cognition or how people understand, learn and teach science, especially as it relates to controversial topics. David has focused primarily on the study of evolution, and I’ve focused primarily on environmental issues and climate change, which has similar political and cultural dynamics,” Henderson said. “We were thrilled to be invited to the pope’s arrival ceremony, especially since education and the environment were such a large focus of his recent visit.

To learn more about this program, see Making It Clear in UD’s Research magazine.

You may also read the UDaily article here.