To ensure that students in the U.S. choose to embrace the increasingly important subjects of science, technology, engineering, and math, it is critical to support math and science teachers who excel in their fields. That is why, each year, outstanding K-12 mathematics and science teachers from each of the 50 states and four U.S. jurisdictions are recognized with the Presidential Award for Excellence in Mathematics and Science Teaching (PAEMST).

Established by Congress in 1983 and administered for the White House by the National Science Foundation, the Presidential Award is the highest recognition bestowed upon K-12 mathematics or science teachers in the U.S. 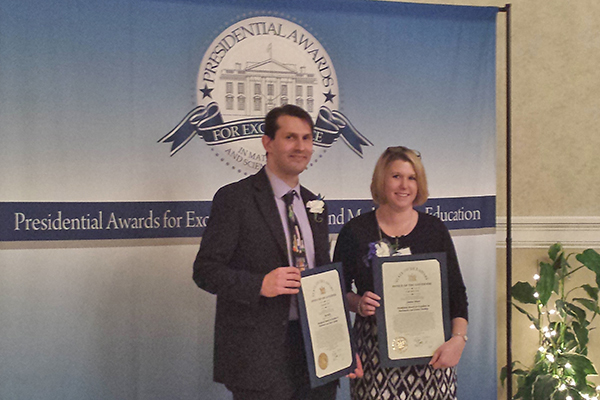 When the PAEMST finalists were announced, President Barack Obama extended these words of appreciation: “These teachers are inspiring today’s young students to become the next generation of American scientists, mathematicians and innovators. Through their passion and dedication, and by sharing their excitement about science, technology, engineering and math, they are helping us build a promising future for all our children.”

This year, both the math and science teachers representing Delaware are graduates of the University of Delaware — Tim Dalby (science) and Jeanine Moore (mathematics).

As the lower school science specialist since 2006, Dalby engages students in pre-kindergarten through fourth grade in hands-on science and engineering investigations. He has collaborated with teachers to create integrated units such as “Monarch Butterflies” and “Flight,” and developed the Wilmington Friends Lower School STEM (Science, Technology, Engineering and Math) Lab to provide students with space and materials needed to explore ideas, identify problems, and solve these problems.

“The Presidential Award is a prestigious honor recognizing innovative science teaching that prepares students to be members of the global community. The award affirms dedication to science education and a commitment to improve and grow professionally. This honor encourages me to continue to strive for excellence in teaching for myself, my students and my colleagues,” said Dalby.

She is a certified teacher for kindergarten through eighth grade and has spent the last 11 years teaching fourth grade mathematics and social studies at Long Neck Elementary in the Indian River School District. She is also a member of the school’s Leadership Team and a mentor to a first-year teacher.

Although Moore was selected to teach science in addition to math this past year, she takes great pride integrating multiple subject matters into her classroom. She doesn’t “just” teach science or math, she creates interactive, interdisciplinary lessons for her students that include economics and social studies.

“The Presidential Award is validation that I have not only positively impacted the students in my classroom, but I have also been an effective role model for my colleagues,” said Moore.

She credits her time at UD for preparing her to take on leadership roles within her school and district and motivating her to offer professional development to other teachers by facilitating workshops.

Article by Alison Burris.
This article appeared on UDaily on March 4, 2014.