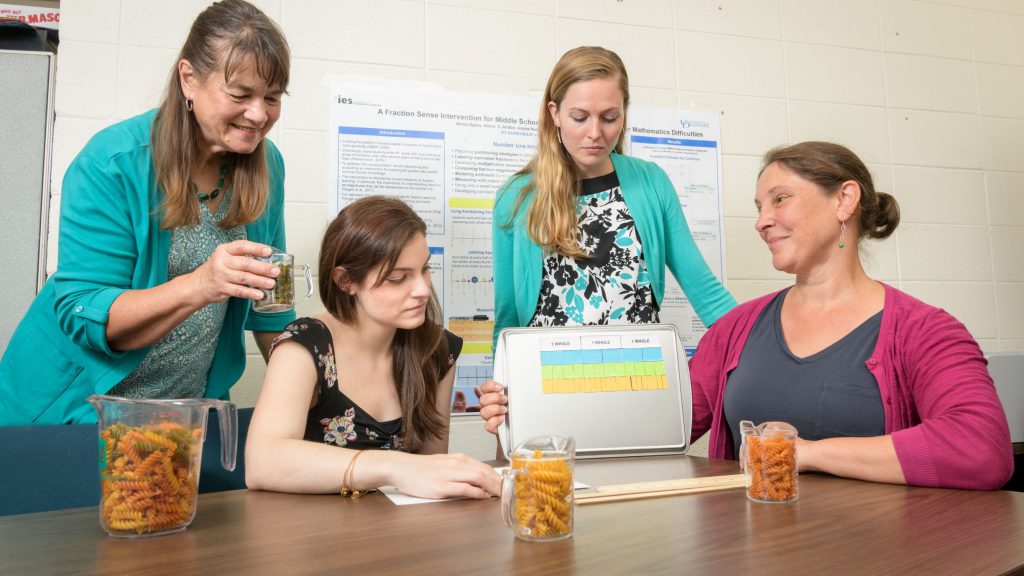 For many elementary and middle school children, fractions are the scariest topic in their mathematics classroom. How can a fraction represent something larger than the number one? How can three-fifths be smaller than three-fourths when five is bigger than four?

Without these foundational skills in fractions, students struggle in later mathematics courses, such as algebra, and begin to lose interest in math. They believe that math is simply “not for them” and turn away from career paths in science, technology, engineering, and math (STEM).

With a new, four-year grant from the Institute for Education Sciences, Nancy C. Jordan, professor in the School of Education, and Nancy Dyson, assistant professor in the SOE, are collaborating with local Delaware schools to develop a new approach to teaching fractions, one that teachers and students find meaningful in the classroom.

“Many approaches to teaching fractions are often tied to general part vs. whole representations of fractions, such as the classic pie model. In fact, when asked ‘what is a fraction?,’ one student in our study responded that a fraction is ‘the shaded part,’” said Jordan. “In contrast, our lessons primarily center on the number line, which broadens the way students think about fractions and their magnitudes. Students can see that fractions are numbers that can be represented in multiple ways on the number line. There are fractions between whole numbers, and fractions can be more than, less than, or equal to one.”

Jordan and Dyson intentionally designed the invention to be used by teachers, rather than researchers, in authentic small-class settings for struggling students. Students engage in meaningful everyday activities, such as racing or measuring with cups, and teachers use animated digital presentations.

The new intervention also incorporates validated approaches from the science of learning, such as varying practice with problems of different types, providing frequent cumulative practice over time, and using physical movements or gestures to promote learning.

This Fraction Sense intervention builds on a previous grant-supported longitudinal study to predict and address fraction difficulties in the elementary and middle school classroom.

For each phase of intervention development, piloted under the Center for Improving the Learning of Fractions, students in the intervention group performed significantly better on a range of fraction concepts than their peers who received the regular school math intervention.

“Throughout our intervention development, we observed students making predictable procedural errors while solving fraction arithmetic problems. Some children had even developed strategies that were pretty resistant to change, such as adding across denominators such that four-ninths plus five-ninths equaled nine-eighteenths, rather than one,” said Dyson. “Students do not easily draw on their conceptual knowledge and jump instead to faulty procedures when faced with an arithmetic problem. In the upcoming year, we are addressing this issue head on to help students catch their mistakes.”

This fall, the team will be mentoring sixth-grade math teachers at those schools to carry out the intervention without the assistance of researchers.

“These teachers will be using the intervention in their regular intervention classes in the first report period. We look forward to getting their feedback on the usability and feasibility of our approach for use in their classrooms,” said Jordan. “The goal is to have an intervention that will be fully useable by teachers, not just researchers.”

The grant involves an iterative approach, where the researches assess, improve, and refine their intervention over several years. Based on their encouraging initial results, Jordan and Dyson hope to scale up the intervention in a future project.