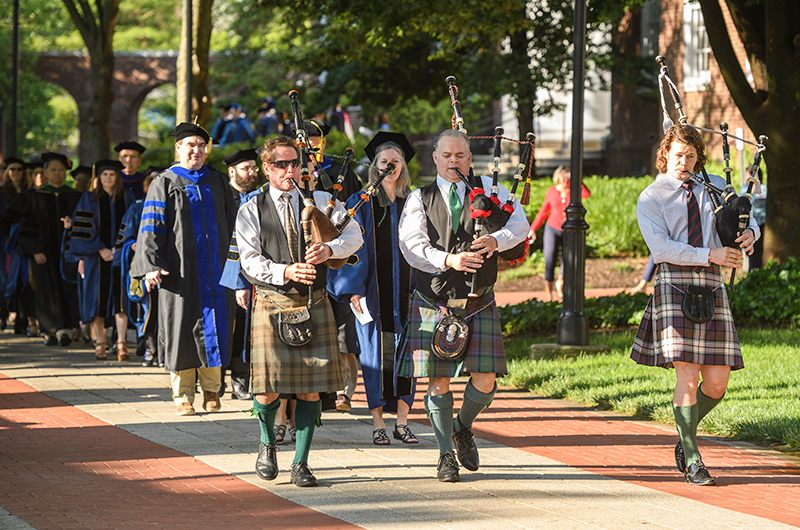 The UD Doctoral Hooding Ceremony procession begins when the bagpipers do. This year students, faculty mentors and University officials were led by pipers (left to right) Mark Hurm, David Bailiff and Joe Hurm.

The University of Delaware’s Doctoral Hooding Ceremony — where students receive academia’s highest degree, the Ph.D. — already has outgrown lecture halls, overflow rooms and the gymnasium in the Carpenter Sports Building.

For the last few years, it has occupied the north end of The Green. Pretty soon, they’re going to need a bigger tent.

With 184 doctoral candidates participating in the ceremony on Friday, May 26 — believed to be the largest contingent in attendance ever — and thousands of family and friends on hand to cheer them on, the Hooding Ceremony is a tangible sign of the importance and impact of graduate programs at the University.

In keeping with UD tradition, the graduates were led by bagpipers — Mark and Joe Hurm and David Bailiff — from Memorial Hall to the sprawling white tent where they would receive the blue and gold hoods and diplomas they had worked so hard to earn.

Assanis, who advised more than 60 doctoral students, 150 master’s candidates and hundreds of undergrads during his career at the University of Michigan and Stony Brook, congratulated the graduates.

He then urged them all to see their new degrees not as an ending, but as “a new phase of work — one that focuses on the creation of new knowledge to help address the complex problems of our world…. Your quest for new knowledge finds its highest purpose when it enriches lives, strengthens communities and helps us create a better world.”

The world is a vital part of this endeavor, after all, with the new doctors representing 32 nations, from Albania to Zimbabwe. And the audience included many family members who had traveled great distances — from Taiwan, Colombia and London, for example — to be present.

“I want you to remember the power of innovation and the promise of engagement,” he said.

“Innovation is essential in engineering and the natural sciences, of course, but also in the social sciences, the arts and the humanities. Consider the challenges facing many of our communities today: poverty, crime, drugs, access to good education and health care. None of those problems will be fixed in a chemistry lab or with a new smartphone app. It’s going to take innovation in the fields of public policy, sociology, psychology, communications and more.

“Engagement means we’re going to apply our knowledge, our creativity and our civic commitment to the critical challenges facing people in our communities and around the globe.”

In addition to instruction, mentoring and advising, it has been Oliver’s practice to invite his students to weekly breakfasts where they discuss “hot-button” topics and social psychology in the context of cross-cultural worldviews of science.

“His students admire his great strengths as a scholar, calling him a ‘superb scientist, collaborator and scholar’ … but their letters focused more on his strong attributes as an adviser and mentor,” Grasso said.

After a brief explanation of the significance of the academic regalia by Mary Martin, associate vice provost for graduate and professional education, the distribution of hoods and diplomas was underway.

Jennings walked with her 12-week-old son, Ahmes, in her arms and the infant got a friendly handshake from Assanis.

Ahmes has been an integral part of this process, said Jennings’ husband, Austin, who tended the boy during the rest of the ceremony.

“He was inside his mommy the whole dissertation time,” he said, “and he came out just a couple of weeks after she defended it.”

Martin added personal notes about each student, most submitted by them, ranging from inspirational to laugh-out-loud funny.

“Are you telling me I can get my Ph.D., but they won’t let Pete Rose into the [baseball] Hall of Fame?” was the comment from Daniel Nasko, bioinformatics and systems biology.

“I would like to write an economics joke, but there isn’t enough demand,” said David Hunt, economics.

Martin said she couldn’t share the note from Marcos Portnoi, computer science, because he wrote it in code.

Melissa Gordon, chemical engineering, has been working on self-healing polymers.

“For my next self-healing project, I am taking a vacation,” she said.

Yao Yao, chemistry and biochemistry, urged colleagues not only to think, but to act: “Ideas not accompanied by action never become bigger than the brain cells they occupy.”

Dee Tilahun drove from Silver Spring, Maryland, with Yoni Tadesse to see his lifelong friend Nikodimos Gebreselassie get his doctorate in chemical engineering.

“He is one of the most respectable, admirable guys I know,” Tilahun said. “I use him as my role model.”

These new doctors, armed with deeper insights and analytical skills, will fan out into many kinds of endeavors and areas of the world — some as new faculty members, postdoctoral researchers, experts for industry, government and a broad range of businesses.

David Carter, who earned his doctorate in urban affairs and public policy, said he wished more government workers had the opportunity for such training. Carter, 53, worked for Delaware’s Department of Natural Resources and Environmental Control for about 30 years. His wife, Marjorie, and mother, Sandy, were on hand for the ceremony Friday.

“It’s indescribable how nice it is to devote years of your life to learning new things,” Carter said.

He was tired and sarcastic after so long in government work, he said, but was re-energized when he encountered the energy and optimism of his fellow students.

“I would recommend doing this at a younger age, but better late than never,” he said with a smile.

Assanis urged graduates to make it a priority to work with others to find the solutions our planet needs.

“As smart as you are, you will never have a truly comprehensive picture of a complex problem like climate change or race relations,” he said. “Collaboration breeds inspiration and helps you open new doors of inquiry and understanding. Work together to go far. It’s the only way to really make progress that endures and benefits future generations.”